A GRAVE VISIT DURING GRAVEYARD SHIFT AT THE POLICE STATION

Cops on graveyard shift duty at Bandar Hilir police station experienced an incident that sent a chilling shock straight to their spines. A CCTV recorded the incident at 4.21am in the state of Malacca where the heavy glass doors were slammed open but nobody was at the doorstep.

The officer in-charge of the police District, Asst Commisioner Shaikh Abdul Adzis said that no report was made regarding this but was baffled as to how a CCTV from a police station could become viral at the social media. An investigation to this regard is going on.

In the footage, four police officers on duty could be seen. The phone rings 4 times and there is a background voice of a woman, presumably a lady officer. As her voice can be heard answering the call, the glass door slams open and as a result, breaking the glass door into pieces. The police officer who was just about to get up from his seat in front of the desk is seen startled. Meanwhile, police officer at far right of the desk rushes to the other door to investigate while the officer at the center reaches out his smartphone to capture the damages to the door.

There is an ancient Portuguese cemetery on Bukit Senjuang (Senjuang hill) which is located at the other side of the police station.  Melaka Malacca is a UNESCO world heritage site which is rich with historical buildings tracing from the days of Portuguese (Alphonso de Albuquerque), to Dutch settlement and followed by British settlements.

Here is the footage:

AN EAGLE RESTS ON A GARUDA STATUE OF AN INDIAN TEMPLE 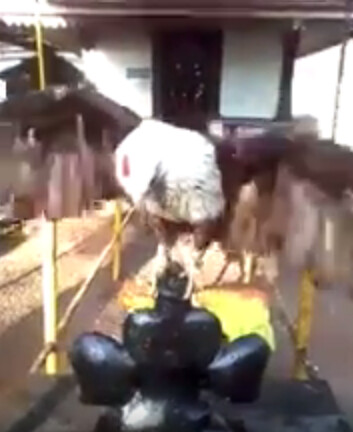 Image above: The eagle seen balancing on the Garuda statue

Everyone is probably familiar with the phrase “an eagle has landed”. Those were the words spoken by Neil Armstrong on July 1969 with reference to their landed aircraft on the moon.  But it was a different story here when an eagle was found resting on a Garuda statue in Sri Krishna Temple of Kerala. At the time of report, it was on 27th March 2017. It has been sitting on the statue since 23rd March 2017. This temple is located in Thakkolam panchayath, Iduki district in the State of Kerala, India. 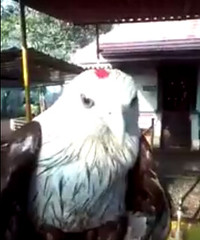 Image above: The eagle seen with "bindi" on it's forehead

The eagle seems oblivious to the surrounding of the temple though devotees were flocking in and out of the temple. Some curious onlookers could be seen watching the bird as it stood there appearing totally tame. The bird didn’t try to fly off when people take close up video of the bird. As it can be seen, some devotee must have applied “Bindi” (red dot) on the forehead of the bird. Obviously, the bird did not get startled by such gestures. 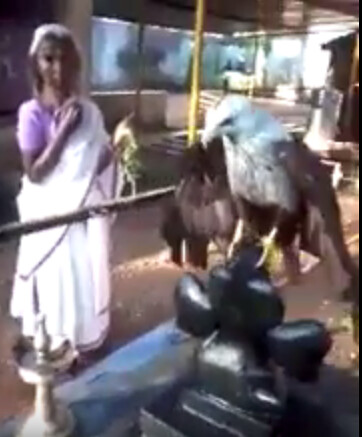 Image above: A curious old lady watches by as the eagle stood still
Eagles are normally known to be flying high above the sky and only come down when it had spotted a prey. This eagle proves contrary to the fact. You can watch it in the video below:

MP says OK for rape victims to marry her rapist 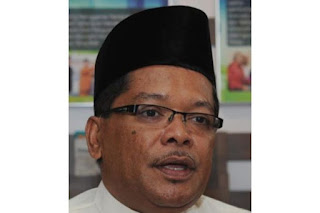 KUALA LUMPUR: There is nothing wrong with a rape victim marrying the rapist, according to a Barisan Nasional lawmaker who even suggested that some nine-year-olds were “physically and spiritually” ready for marriage.

“When we discuss 12- and 15-year-olds, we don't see their physical bodies because some children aged 12 or 15, their bodies are like 18-year-old women," Shabudin told the Dewan Rakyat on Tuesday.

The former Syariah court judge added that some girls who reached puberty when they were as young as nine years old were “physically and spiritually” ready for marriage.

“So it's not impossible for them to get married,” Shabudin said, adding that there was “nothing wrong” with a rape victim marrying the rapist as it could serve as a “remedy” to the increasing number of social problems.

Shabudin said this when debating the Sexual Offences Against Children Bill 2017 after several Opposition lawmakers suggested amending it to include child marriages as an offence.

He said that although rape is a criminal offence, the rapist and the victim should be “given a second chance to turn a new leaf in life".

“Perhaps through marriage they can lead a healthier, better life. And the person who was raped does not necessarily have a bleak future. She will have a husband, at least, and this could serve as a remedy to growing social problems,” he said.

Dr Siti Mariah, however, argued that allowing the rapist to marry the victim would not guarantee a better life.

“I don’t agree with marrying off the victim to the rapist. If the rapist repents, maybe that’s fine, but what if the husband is ‘haprak’ (useless)?” she said.

She said that one of the cases involved a 35-year-old man in Negri Sembilan who married a 14-year-old with a disability after allegedly raping her. The man then reportedly raped his 11-year-old sister-in-law and forced his wife to film him committing the act.

Citing his experience as a judge, Shabudin, however, said that Teo should not generalise the issue as there have been many cases where such marriages did not end in divorce.

“The girl becomes safer when she is married rather than when she is left alone. Don’t assume they (rapists) remain bad people,” he said.
Teo's motion to amend the Sexual Offences Against Children Bill to include child marriages as an offence was ultimately defeated by a voice vote.


Read more at http://www.thestar.com.my/news/nation/2017/04/04/tasek-gelugor-mp-not-impossible-for-12-year-old-girls-to-be-married/#dCek1yJOwSBUBSHQ.99
My Questions:
1. Is it "OK" if the 9 year old is his daughter? Will he affectionately call the paedophile aka rapist who forced his "pxxxx" into his daughter as son-in-law without any conscience?
2. If the rapist force himself into his own mother, should he be married to his own mother? Refer to: http://www.thestar.com.my/news/nation/2017/03/09/factory-worker-arrested-for-raping-own-mother/
3. If it is a "Gang rape", should all the rapists be married to the single rape victim?
4. If the child reaches puberty and becomes pregnant at the age of 11, is it OK? for her to go through with the pregnancy? Refer: http://mystiquearth.blogspot.my/2015/08/an-11-year-old-rape-victim-in-paraguay.html
5. If the rapist, rape someone's wife, or his own for that matter, should the rape victim's husband divorce her in order for the rape victim to marry his wife?
6. Should incest be regarded as lawful? Refer: http://mystiquearth.blogspot.my/2015/09/incest-man-justify-his-act-with.html
7. Has he given any thoughts to the child's future and education if she is to be married off at such an early stage?
8. If a boy/man proposes to a girl and it gets rejected, he only has to rape the girl in order to marry her. Wouldn't this bring a new set of social problems?
9. Is it "OK" for the rapist to marry his own sister after raping her? Another incest possibility...
10. If a rapist does not stop after raping one girl and continues raping many others, would it mean that he gets to marry all of them?

Who could believe that a 10 year old could master 400 languages? Muhamad Akram who hails from Chennai, India started to learn foreign languages since he was 4 years old. He has achieved Unique World Records Certificate as the “World’s Youngest Multilingual Typist”.

How it started
He says, “The first language that I learnt was Tamil language. It was a handwritten transcript from Saint Thiruvalluvar. I learnt this at the age of four. From then onwards, I learnt a series of other languages. He has undergone tutoring for both reading and writing of the languages.

Conceptualization of a 10 year old boy upon language mastery.
He invented his own language with characters and names it “Attan”.

Akram’s father shares his wisdom to other parents.
Akram’s father says, “Never force your ambitions on your children. Instead, find out what they are interested in and nurture these interests.” He has facilitated his son’s interests to learn languages upon learning his ability to quickly grasp the languages at unbelievable speed.

LABUAN: A traditional Silat display at a wedding turned bloody when one of the exponents stabbed his 'opponent' with a keris, killing him.
Mohd Amil Zulkarnain, 17, was performing a silat routine for a wedding ceremony at Kampung Patau-Patau here on Saturday when the incident occurred.
While performing a mock duel with his cousin, Amil was accidentally stabbed in the left chest by the curved blade. He was rushed to the hospital but died on the treatment table. The keris, a traditional Malay weapon, is usually regarded as extremely lethal due to its 'wavy' blade structure, which does not permit wounds to close easily.
Labuan acting police chief Deputy Superintendent Mohd Ibrahim Mohd Ghani said they received a report from the hospital on the incident at 1.23pm on Saturday. “Initial investigation revealed that the suspect, who is the victim’s cousin, was performing the silat with Mohd Amil about 11.20am. “During the course of the performance, the suspect is believed to have stabbed the victim,” he said.
He said suspect has been detained for further investigation.The case is being investigated under Section 304(a) of the Penal Code of causing death by negligence.
Video above: The last moments of the mock battle that took a life in vain. An unexpected turn of event that will haunt the surviving youth, Amil for the rest of his life. Hope and pray that he will overcome the ordeal.

A GRAVE VISIT DURING GRAVEYARD SHIFT AT THE POLICE STATION

Cops on graveyard shift duty at Bandar Hilir police station experienced an incident that sent a chilling shock straight to their spines....

Mystique Earth
Welcome to Mystique Earth. For suggestions, ideas, feedback or comments, I can be reached at mystiquearth@gmail.com Thanks for all your positive feedback, mails and review.